It’s Reeds Ferry Sheds Grand Opening. Wait a minute… Reeds Ferry Sheds has been around over 50 years, so how could we be having a “grand opening”?  Here’s how. Google is in control of the world. If Google says you don’t exist, you don’t. Ever since we opened our showroom on Route 102 Google Maps street-view has showed our headquarters as an empty field. Customers would search our location and see nothing more than some trees, weeds, and a lonely woodchuck. 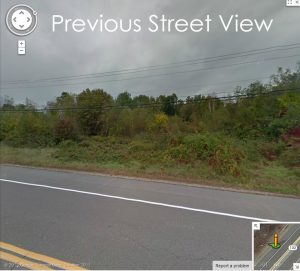 It’s difficult to convince folks to make the trip to your store when Google shows it as a wildlife preserve. 😉

If you look in the bottom corner of the picture it says “report a problem”, so we’ve called Google every day for the last five years to tell them “we had a problem”. After awhile we figured out that “reporting a problem” is different than “solving one”. Each time Google would tell us we were on the schedule for a drive-by. Then we’d ask if “on the schedule” meant sometime in this decade?  But seriously; how crazy is it that Google would take on the job of driving and recording every street in America?! It’s insane, but they do it… Our complaining about how long it takes is like being in China 7th century BC and saying “When you gettin’ that wall done?”.

So the bottom line is, we welcome you to the re-opening of the grand opening! See below. Google recently drove-by and updated our street-view on Google Maps! Reeds Ferry Sheds® now exist!  (and thank goodness that day we weren’t walking to the mailbox in our underwear.) 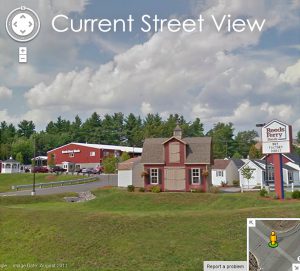