Reeds Ferry Sheds® is a participating contractor on the television show This Old House. The PBS Network TV series first went on-the-air in 1979 and today it remains the most watched and respected home improvement program on national television.

In Season 38 of This Old House, Host Kevin O’Connor and the programs long-time General Contractor Tom Silva work with Reeds Ferry to create an outdoor living space for a home in Arlington Massachusetts. Homeowner Emily Deldon wanted an enclosed space for a yoga studio. Emily and her husband Nick determined a custom Reeds Ferry Shed was the perfect solution. Watch the video below.  In it Kevin O’Connor meets with Reeds Ferry Project Foreman Rich James who managed the one-day build. After the pre-assembled walls and roof go up Tom Silva inspects the quality of construction.

Renovation of the Deldon’s century-old Arts & Crafts style home built in 1909 is the focus of 16 episodes. Reeds Ferry’s goal was to match the craftsmanship and look and of the work taking place on the house. The end-result is a 14×20 studio-shed with cedar shingle siding, 15-lite French doors, and an extended portico supported on columns. All of these features mimic the style of the Deldon’s house and achieved the goal of a matched building pair. The studio-shed has a finished interior with climate-control, plenty of open floor space, plus added space in the loft above the portico, (which we learned is perfect spot for storing yoga mats:). Below is a photo of the finished studio-shed. 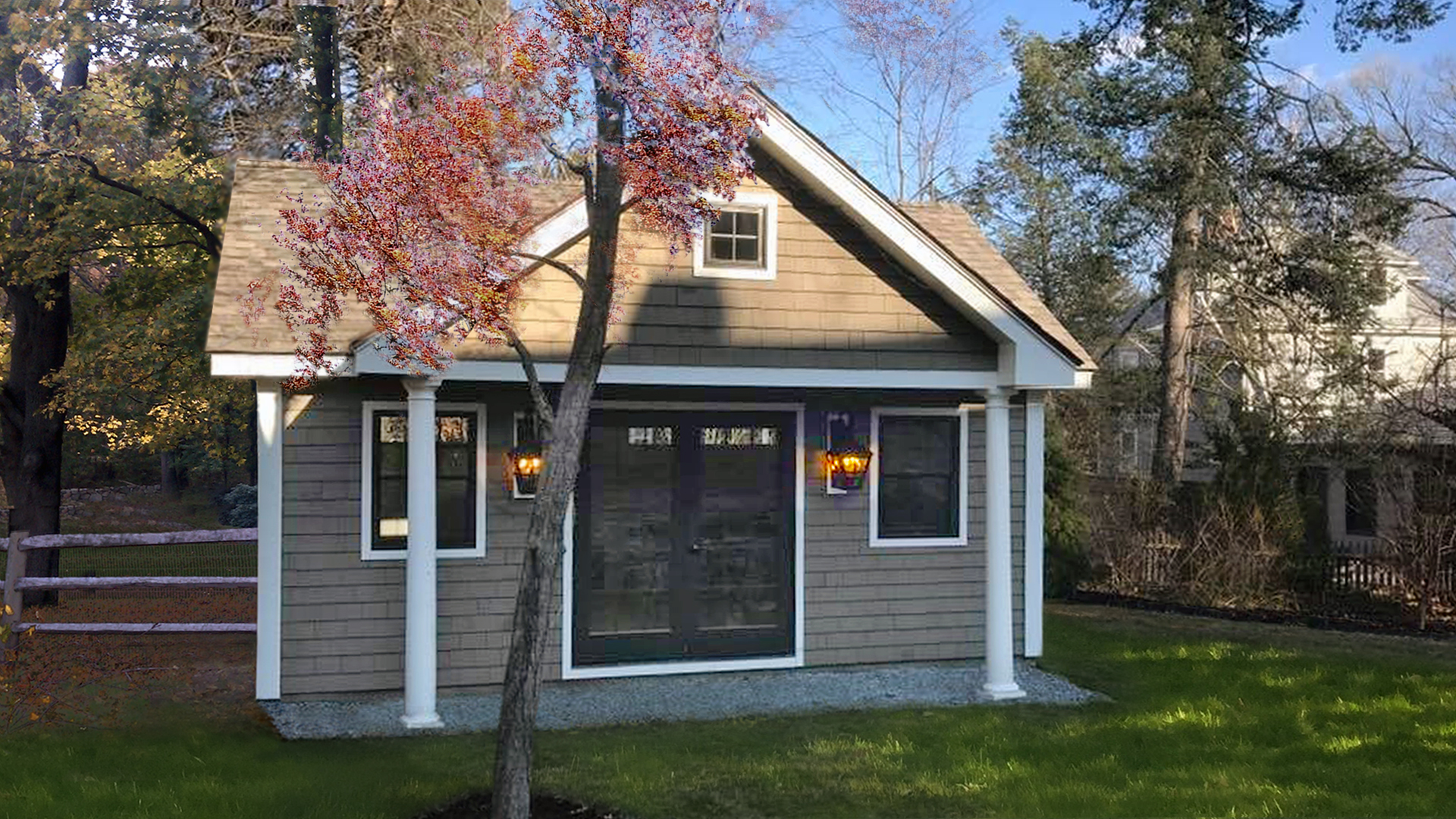 Below left, Kevin and Tom pose with the cast and crew of Reeds Ferry Sheds. – The photo on the right was taken at the “wrap party” held at the Deldon’s newly renovated house. Left to right are Tim Carleton, VP of Reeds Ferry -Norm Abram, Co-host of This Old House -Rich James, Reeds Ferry Project Foreman -and Mike LaCorcia, Reeds Ferry Site-Manager. If you work with wood, there’s no greater thrill than meeting Norm Abram. Norm is a Master Carpenter and has been part of the show for 38 years. Saying he wrote the book on carpentry isn’t quite accurate, because he’s written 8 of them. When he told us, “Nice job on the shed”, it’s the same as having Jack Nicolas tell you “Nice swing”.

Click here to see all 14 episodes of This Old House and the Art & Crafts restoration in Arlington Massachusetts. Reeds Ferry Sheds would like to thank Kevin O’Connor, Tom Silva, Charlie Silva, Norm Abrams, and the entire staff of This Old House. And thank you to the Deldon Family for allowing us to be a permanent part of their home.

Amazing team that worked in brutal weather conditions to complete a quality shed. Tim, Pat, Eric and James did it all with a smile. A great value and I highly recommend Reeds Ferry.﻿

Reeds Ferry is an impressive company. Great quality, but the way they go the extra mile to serve their customer is what makes them different. I was very impressed with the entire process﻿