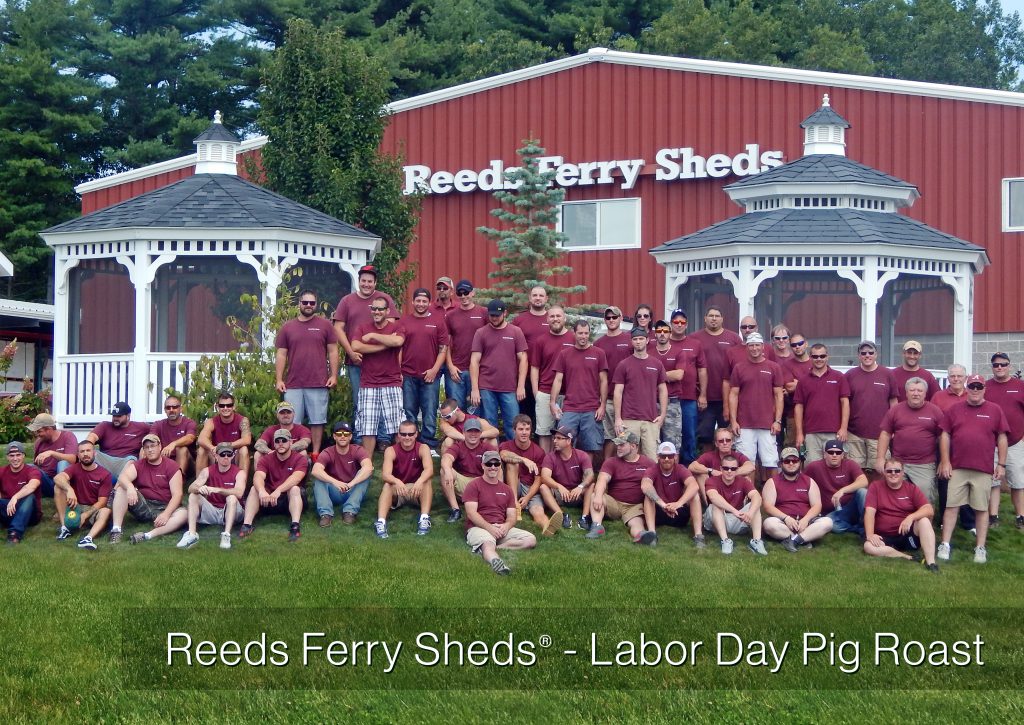 Since the first Labor Day holiday in 1894 America has celebrated the contributions workers have made to the strength and prosperity of our country. This Labor Day Reeds Ferry Sheds did the same. Monday
we put our business on pause and had a big pig roast, because the best way to pay tribute to our staff and say “Thank you” is with bacon.

It wouldn’t be a pig roast without the guest of honor, the pig. Enough ham to feed over 100 shed carpenters, along with corn, watermelon, potato salad and steamers. The chef at the pig pit was Reeds Ferry® Service-Manager John Miley. Thanks for a great spread John!

Pig Pile was a new event at this year’s roast. Four teams of 15 competed to see who could fit the most people in our Smart Car, (below left). Members of the winning team were awarded with not having to be seen driving the car for a year!  The winning team stuffed 11 people in the car. The record is 16 set by a group of circus clowns from Des Moines Iowa.

Dunk Tank: The Vice-President of a company is like the Vice-Principal of a high school, generally they’re not well liked. Fortunately we were able to talk our Vice-President into a dunk tank!  (below left.) He was submerged in cold water on throw #142.  142 seems like a lot, but officials ruled the first 137 were aimed at his head and should not count.

$500 Double-Elimination Cornhole Tournament: Cornhole is a bean-bag game. It’s like horseshoes, but unlike horseshoes you can play while intoxicated without fear of concussion. Cash money was at stake, so no team was foolish enough to imbibe. 3rd place took home $100, 2nd place $250 and $500 to the winning duo. But because this is 2019 everyone received a trophy and were told they were winners just for participating.

Labor Day is our chance to stop and appreciate the great work of our staff.  We build quality sheds, but our brand is represented by the men and women wearing Reeds Red.
We thank them sincerely for all they do. Happy Labor Day…